In this poignant article, a Christian mother talks about how her daughter’s Muslim faith is making her see a different side of America: “People stare as we tell our daughter Alana goodbye at the John Wayne Airport in California. Alana is a Muslim, and her head scarf turns heads every time. Alana laughs to lighten the moment. “Oh, I hate airports,” she whispers to me. “As soon as I get on a plane, I know what people are saying, “Oh, God. A Muslim!” Read Full Article Here.

“”In one Middle Eastern country, the practice of any religion other than Islam is banned, women are not allowed to drive, the screening of films is forbidden, there are no elections and last year 87 people were publicly beheaded.

In the other, religious minorities have seats reserved in parliament, and churches, synagogues and Zoroastrian temples to pray in, there are three female vice-presidents in the government, the country’s film directors have a worldwide reputation and one of its films won an Oscar in 2012, parliamentary and presidential elections take place, and the state does not behead people.

Yet the former country is a close ally of the West while in the past the latter has been labelled part of the “axis of evil” by the US.” Read the Full Article Here.

New WSJ/NBC public opinion pollreveals the continuing support of the American public for diplomacy with Iran. 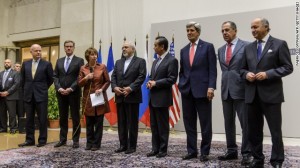 Even though critics of Obama’s diplomacy have mounted a relentless public campaign to persuade Americans that it is better to put more pressures on Iran in order to force its government to capitulate on its nuclear program, it seems that the American public is reluctant to exacerbate the conflict with Iran: “When given two options, 54% of adults said they think it is important to have an agreement in place with the Iranians, compared with the 37% who believe the emerging framework is too risky and that economic sanctions would be a more effective deterrent to prevent the country from building a nuclear weapon.” 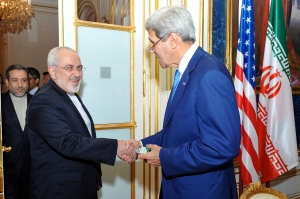 Two years after his election, President Hassan Rouhani of Iran is about to go down in history as a leader who defused an intense and bitter conflict that could have led to a military attack on Iran. A nuclear deal that the majority of Iranians hope will bring an end to the isolation of Iran, much needed relief from international sanctions, and a new chapter in U.S.-Iran relations is now in sight. If other enemy countries have faced each other on the battlefield and ultimately managed to work out their differences, why is it impossible for Iran and the United States to do the latter? 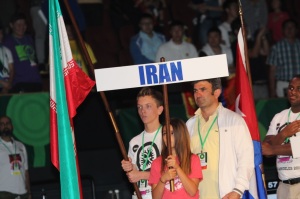 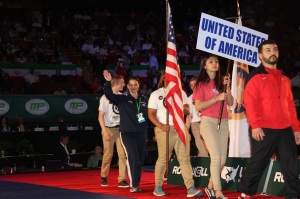 After eighteen months of intensive nuclear negotiations, Iran and the United States are inching closer to achieving a comprehensive nuclear agreement by their self-imposed deadline of July 1, 2015. Although more technical work is needed to refine the nature of the inspection and verification system and to institute a synchronized process that will lead to the elimination of all nuclear-related sanctions, the framework agreement of April has paved the way for a final nuclear accord. Such a diplomatic breakthrough will have a significant impact on both Iran and the United States, taking their relationship to a new level. This would have been unthinkable a few years ago.

It is not easy to reverse thirty-six years of mutual satanization. Both Tehran and Washington must deal with vocal domestic opponents who are mirror images of each other. But both Presidents Obama and Rouhani have started a carefully choreographed process of replacing hostilities with respectful language. A month after his inauguration in September 2013, President Rouhani surprised everyone by holding a brief telephone conversation with President Obama. This was the highest level of contact between the two countries since the 1979 Revolution. The major development broke the ice and prepared the ground for an interim nuclear deal, which was signed in November 2013. The historic telephone call was the climax of a dramatic shift in tone between the United States and the Islamic Republic of Iran. After Rouhani’s return home, a large group of people greeted him with cheers, and many others expressed their excitement and praise via social media.

Realizing the significance of public symbolism, both Washington and Tehran have engaged each other at the highest levels, with Foreign Minister Javad Zarif and Secretary of State John Kerry holding dozens of meetings and appearing next to each other in front of flags of the United States and Iran. For the first time in thirty-six years, the U.S. Secretary of State held a meeting with the Iranian Foreign Minister in the residence of Iran’s Ambassador to the U.N., Ali Khoshroo. Even though, technically, the United States maintains a 20-mile travel limit on the movement of Iranian diplomats based at the United Nations, allowing cameras to film this historic meeting was part of the careful choreography to change Iran’s public image.

Rouhani’s administration has also engaged in a reconstruction of the United States’ image inside Iran. He has had a much more difficult task since he does not control the state-owned television and radio. Rather, the Director-General is appointed by the Supreme Leader and is not accountable to the elected President. Despite this disadvantage, Rouhani and his experienced team of advisers know how to operate within the system. They have used social media and other media outlets effectively to gradually change the narrative of U.S.-Iran relations from that of two countries in permanent crisis to one of two countries negotiating solutions to their current problems. The Rouhani administration has quietly endorsed civil society initiatives that attempt to build bridges in the areas of sports, culture, education, music, and the arts. They have relaxed Iranian visa requirements for American visitors, encouraging more people-to-people exchanges. Moreover, for the past three years, Iranian athletes have competed in several wrestling and volleyball tournaments in the United States, and several universities in Iran are currently pursuing academic cooperation with American universities.

In a carefully structured choreography, Rouhani and his team have made it possible for American visitors to Iran to receive media attention and press coverage, engaging in an Iranian version of public diplomacy. It is not unusual to see American flags at hotels, in sports arenas when American teams are competing, or at conferences and gatherings. It is a remarkable change when one considers how difficult it was for Iran and the United States to even admit to having dialogue with each other. 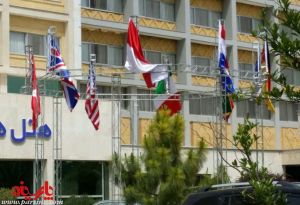 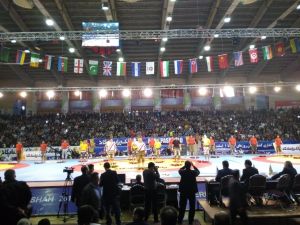 Yet the road towards the normalization of relations between Iran and the United States has dangerous turns that could upend the drivers if they are not careful. The American public is still upset about the hostage crisis of 1979-1981, and media images of the burning of the American flag remain in people’s memories. The book, Not without My Daughter, became a bestseller and was turned into a film, and the film, Argo, won several awards. Republican critics of President Obama’s diplomacy count on this reservoir of negative perceptions to thwart any rapprochement with Iran. By keeping the U.S. Congress engaged, President Obama can deflect some of the criticism and maintain public support for his diplomacy.

Similarly, Rouhani must deal with opponents who have a vested interest in sustaining conflict with the United States. The dispute with the United States is so embedded in the fractured domestic politics of Iran that Rouhani has to navigate the dangerous waters of factional politics very carefully. Some perceive “nuclear negotiations” as a euphemism for broader changes that could result in a major realignment of political forces inside Iran. Others perceive the nuclear negotiation process as one that will inevitably end in the normalization of relations with the United States and the integration of Iran into the international community. Rouhani has powerful cards to play against his opponents and a chance to forge a historic new chapter in the Islamic Republic’s foreign policy.

After thirty-six years of mutual satanization, it is easy to advance pessimistic arguments and to be doubtful about a future in which Iran and the United States will no longer be enemies. However, the nuclear negotiations and the prospect of a final nuclear accord demonstrate the fiction of the idea of permanent enemies destined to be in conflict with each other.

The latest mid-term elections in the United States has led to a Republican majorities in both the Senate and the House.   Although this change of power in U.S. Senate could lead to Republicans demanding a a more hawkish foreign policy,  particularly with respect to Iran,   the current  nuclear  negotiations between Iran and the United States and the Europeans has gone too far to be reversed now.   Of course, with a Nov. 24th deadline looming on the nuclear talks between Iran and P5+1, the negotiators enter the last month of negotiations with an urgency to complete a deal before this deadline.  Both President Obama and President Rouhani have bet a huge amount on the success of a nuclear deal with Iran, and long-term engagement that will lead to normalization of relations between Iran and the United States. They have invested a lot to risk a failure, and the stakes could not have been higher for the Iranian President Hassan Rouhani.  The urgency of reaching a nuclear deal with Iran,   and the conflict with ISIS were the focus of another secret letter from President Obama to Iranian Supreme Leader Ali Khamenei, his fourth letter to Khamenei since 2008.

“If the positive trajectory of the relationship that followed Rouhani’s replacement last year of the Holocaust-denying Mahmoud Ahmadinejad continues, some of the credit will go to a soft-spoken former US ambassador to Czechoslovakia and Venezuela, William Luers.”

The latest U.S. intelligence report for Iraq points to an interesting geopolitical development between Iran and the United States in Iraq. According to reports, “the elite Iranian forces backing Shia militias have been ordered not to attack the Americans.”   One official familiar with the situation in Iraq told reporters that “They [ Iranians ] are not going after Americans…They want the nuclear talks to succeed and an incident between our guys and their guys would not be good for those talks.”   Iranian special forces were on the ground fighting ISIS before the United States and its allies launched their bombing campaign.  Iran cannot afford to see Iraq fall to ISIS terrorists.  Intervening in Iraq was not a choice, but a necessity for Iran.

As ISIS forces continue to undermine regional security and Iraq’s territorial integrity,  only one country has the influence and capability to defeat ISIS.  Roger Cohen of the New York Times puts this way: “ISIS is a barbarous, shared enemy whose rollback becomes immeasurably more challenging in the absence of American-Iranian understanding. Allies need not be friends, as the Soviet role in defeating Hitler demonstrated. President Obama’s war against ISIS makes war with Iran more unthinkable than ever. Absent a “comprehensive solution that would ensure Iran’s nuclear program will be exclusively peaceful,” in the words of last year’s accord, the drumbeat for such a war would almost certainly resume. From Jerusalem to Washington countless drummers are ready.” 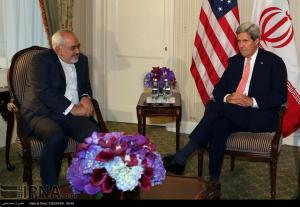 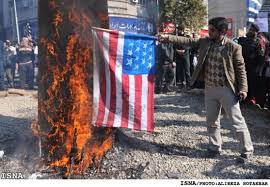